Today, I had a little go at wood carving and before you start sniggering Yes I did have some wood left at the end of it and No I did not injure myself (this time) 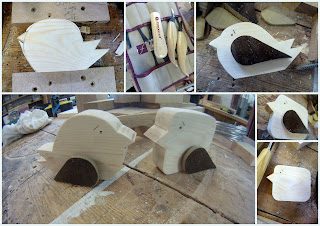 This first part of this little project with these two sweet birds made out of Pine off cuts. I cut, sanded, re cut and re sanded until I got the basic shape then made the wings which was a bit more cuting and sanding. The wings were a little offcut of some varnished mahogony ,which once had a life as a wardrobe but now is a stool ( but that's a different story). So now just to stain the pine and wood glue on the wings and presto two cheeky wooden birds with inqustitive eyes. 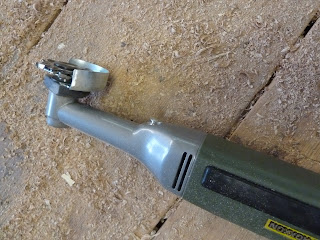 The second part of the project was a little more daring! Bigger bit of wood ( bit of Oak, as it happens, Get me eh!) and power tools. I had ,what can only be discribed as, a electic toothbrish with a large metal wheel attachment! Not an angle grinder because I know what one of them looks like but just as whizzy and smaller.

And this is it 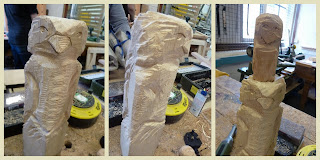 Yeah, I know, It's not that great but it's just my first try and although I did sweat like a pig trying to get it right maybe next time will be better. Maybe if I had drawn out what I was trying to acheive? Yes thinking about it that must have been where I went wrong less native American totem pole and more Robin, Owl or Toucan. Ah well, you live and learn and I'm not giving up yet.