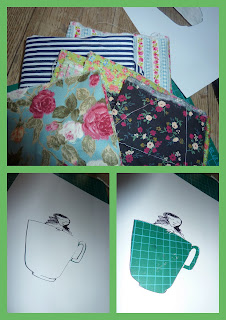 Sometimes when I work I just go with an idea, no sketching, no pre thought just inky pen to page and from the grooves in the paper comes whatever character which was wilfully in my mind.

Other days, and I'm not quite sure which day's I like best, I have to plan!
I have to decipher where and whether this idea can be used or not. 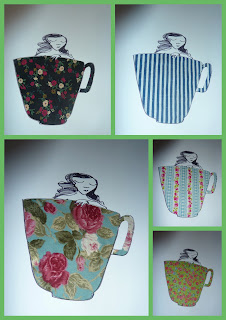 And the cups? I drew so many cups, each with personality but wondering if they detracted from the pure black and white image. I later settled on the wallpaper mounts to add colour and  imagination to these brewed beauties.
And this idea was something I looked into during all that.

Being who I am I have plenty of fabric swatches of various floral and garish promise. Armed with these I cut out a scribbled lady leaving her and a tea cup shaped void and tried out the different combinations.


I was pleased with the results but chose to leave such bold statements in colour to further on down the line. But this idea may well reoccur!
Posted by Creative Fox at 14:37