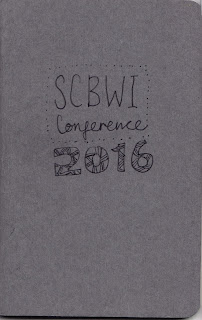 18th to 20th November this year I signed up to the SCBWI Conference in Winchester. It was only the second real SCWBI event I have been to since becoming a member. I do attend a writing critique group every month ,which I love, but as an illustrator I was keen on making some connections with other doodlers for the weekend. I took a really small notebook with me, mainly for sketching but the speakers and workshops were pretty great so I have notes from those too. Here is a brief overview.

I really wasn't too sure I should go to the Friday night fringe events. I commuted to the event ,choosing not to stay over in one of Winchesters lovely hotels, so my days were going to be pretty long anyway but I plunged to go and meet people at the Friday Sketch Crawl and after that Nick Cross' Add Character to you Biography workshop. Everyone was very friendly and it was a great way to warm up to the idea of meeting new people. I waved and chatted to some of the very same people all weekend actually. At this point I wish I had signed up for the Friday night crit group/meal thing. It would have been a great opportunity to talk picture books but I had to go home and really start stressing about my portfolio 1 to 1 with Miranda Baker.
After a brief moment of frightened rabbit at everything people said I filed into the main lecture hall to hear David Almond talk about his writing and generally about his ethos on creating. What a dude! seriously - he made me homesick for the Northland and inspired me in every sentence. I could feel the room sigh with thanks when he commented that writing was hard and the stationary was sometimes the best thing about it.
Leigh Hodgkinson was such a marvel. After two minutes of looking at her crazy creative process I had jotted down an idea for a picture book and mentally rearranged my house to make space for those clown shoes I was thinking of throwing away. Such an explosive vibe, every project she has been involved in seemed to seamlessly morph into the next. Unashamed to be herself, consistently with her personal and commissioned projects, is my new goal in life. We are often told to find a style, streamline and concentrate but Leigh's idea of making art spans puppets, textiles, film, books, lampshades and sculpture. I felt exhausted and exhilarated at the end of her talk.